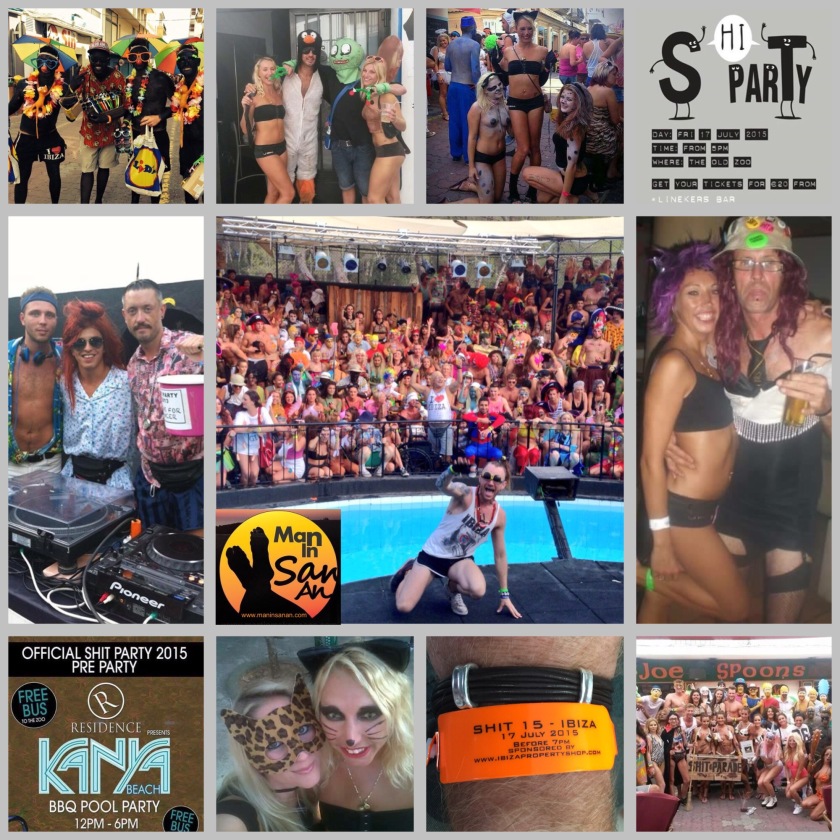 Tomorrow is the 13th annual SH*T PARTY – the infamous fiesta that was started by the workers for the workers and has caused many a sacking over the years as it became more and more unmissable. Here’s a brief timeline plus we talk to the founder and a prominent British worker.

2002 – Popular San Antonio worker John ‘Loco’ Moore decides to throw a one-off party in front of the WIPS supermarket near to the fountains, he aptly names it the ‘non-party’ due to the strange location. Well attended

2003 – Loco decides to expand the idea to a party in Gorms Garage (now Temptation) charging an entrance fee of 2 euros. When trying to think of a name he decides to call it after the word most frequently used by workers to describe their job, hours, boss, treatment (and most other things) so the Sh*t Party is born. It’s billed as a workers blow out , sells out and goes on until midday the next day (ahhh the good old days).

2004 – Workers want a bigger and better party so Julian Cobby from Simple (now Soul City) suggests to Loco to use ‘Fantasyland’ (now home of Zoo Project). Bartolo Escandell agrees to let Loco use his venue. Police OK the event and 800 people turn up and party from midday to 6pm.
2005 – With confidence now high a bigger and better event is organized running from 5pm-12am. More than 1000 people attend.

2007 – Fancy dress is introduced to to make the event more colorful and give it a true festival flavour.

2009 – The Party is now firmly established with over 2000 people attending, mainly in fancy dress. That year alone almost 40000 euros is raised for charity.

Party Founder John Loco tells me: “The aim of the Sh*t Party is to give the San Antonio workers, who are mainly British, a bank holiday type day off so they can dress up have fun. All money raised goes to Ibiza based charities which has enhanced our standing within the local community. I am proud to say that through the party we have not just had some amazing times but raised over 200 000 euros for Caritas – the homeless society plus we’ve also been able to help local people with life changing and life threatening illnesses”
San An Worker Beccy Oxley added: “I came to Ibiza in 2005 on a one way ticket and never looked back! That year was my first Loco Sh*t Party and I have been every year since. It is such a great day which brings all of San An workers together like no other party does, be they old or new. Everybody gets dressed up and lets loose. For some its a day to let off steam half way through the season, for others its their leaving party. For me its a great way to catch up with friends I hardly see due to work!!”

“The fancy dress outfits are fantastic, the effort people go to and the ideas they have are incredible – I’m a cat – I always have been so now its tradition”

“San Antonio is a place very close to my heart, like so many others I call it home…..year after year I see workers come and go. Many say ‘this year isnt the same’ but everything changes so you just have to adapt. P One thing I always see is people coming here and making friends for life – that will never change and the Sh*t Party is such an important date in the workers calendar”

SH*T PARTY 2015: 17 July 2015 from 5pm at Fantasyland, Benimussa Park
Entrance: 20 euros on the door or pre-paid wristband, all proceeds go to local charity.