It’s time once again to say goodbye to the madness of August in Ibiza and reflect on the longest month of the season.

September is a busy month in it’s own right with closing parties galore but the difference from August is palpable. For many, September is the best month of the year: the days get shorter, the weather gets cooler and for those living and working on the island the money is in the bank so it’s time to relax and enjoy what’s left of the summer.

For an island that relies exclusively on tourism what is always surprising is how ill equipped Ibiza is for the peak season: the collapse of refuse collection, the traffic, the roads that are a daily deathtrap, impatient taxi drivers that bully anyone that dares to get in their way and lets not even mention the overcrowded beaches and beach clubs….

The internet inquests on the inefficiency of Ibiza have already started and the debate will be vociferous yet in a few weeks it will be confined to memory as the island starts to soothe itself and get back to normal (well as normal as Ibiza can be). The debate always comes to a crescendo when the island is full to capacity which is only for about 10% of the year.

August 2017 may well be remembered as a pivotal time in our Island’s history. The time that our greatest commodity became our greatest enemy.  How and why did tourism become such a dirty word?

When the whole system is failing you have to find someone or something to blame so instead of blaming the self interested politicians, the cartels that control the hotels and transport with a mafia like grip and a paper heavy, deeply regulated system that is so antiquated that it takes months or even years to get anything done you turn your attention to those that are easiest to blame. Those that come to the island and spend their hard earned money in search of fun and sunshine.

2 years on from the arrival of the unfair and unjust ecotax the latest ‘initiative’ by the Balearic government in Palma is for a proposed cap on tourism numbers and the forming of designated tourist areas but in the meantime all new licences and applications for legal accommodation has been frozen for 12 months while everything is reviewed. This decision comes after an explosion in booking sites like Airbnb and has been criticised by business leaders and major tour operators.

The Balearic government’s plan to limit the tourist numbers presumably doesn’t involve limiting the number of incoming flights? That would be very difficult under the EU’s freedom of movement law.

The Spanish airports operator AENA figures show that there are more flights than ever coming into the Balearic Islands which means that more beds and services are needed. It’s a simple equation but if the masterplan is just to turn off the supply tap then there can only be conflict and strife ahead as the sums suddenly don’t add up. It’s also easy to assume that more businesses will be driven underground leaving legitimate businesses to prop up the shortfall in taxes.

All in all it’s a bit of a mess with everything put on hold for a year. Who knows what will happen in 2018 with these big changes looming but with elections in 2019 everything could change once again. Oh joy.

All the while, Ibiza will start the recovery process of healing itself. The rubbish will get taken away, the roads will become less hazardous, the beaches will start to have gaps in the sand and in less than 10 weeks the international flights will cease to operate. Too much in the summer, too little in the winter, the Island is always extreme.

Rumours of a rift within the coalition government team first surfaced last week with reports of a stand up public row between Ferrer and Deputy Mayor Pablo Valdes.

The row was about the implementation of the new laws regarding the removal of terraces in San Antonio with Ferrer in favour of a phased in approach while Valdes and Aida Alcaraz, (Councillor for security) wanted a hardline approach.

Now that Sr. Ferrer has been removed from the government team it remains to be seen whether the other 2 members of his own PI political party will stay in their jobs. If they don’t then there could be a crisis as the 2 remaining political parties, PSOE and Reinicia, would only have 10 seats between them on the 21 seat council. Watch this space! 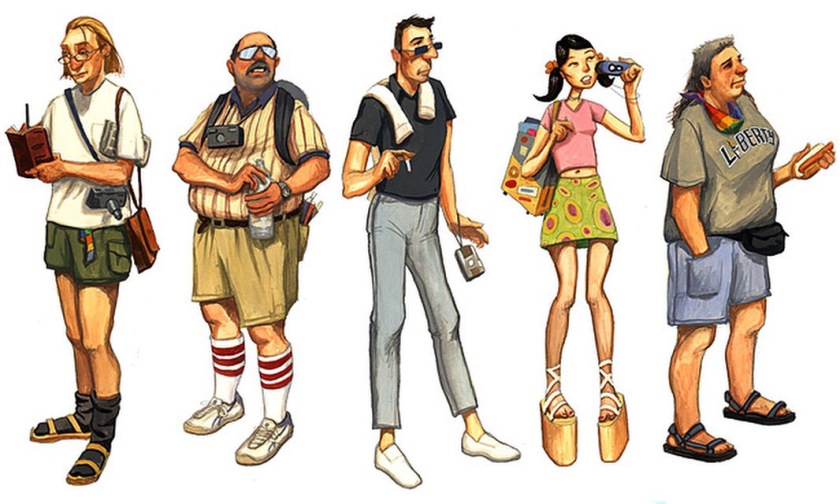 Peak season in Ibiza is always testing. Traffic is backed up and every bar, restaurant and corner of the island is full. For those living and working on the White Isle it’s a tough time of the summer but even though the island relies exclusively on tourism it’s become fashionable to bite the hand that feeds.

As other destinations such as Barcelona and Mallorca have also found out, there’s now a residents backlash against the very commodity that has made them rich beyond its wildest dreams.

The keyboard warriors, for so long a lone, bitter voice in some faraway local bar are becoming more and more venomous in their denoucements of the travellers who fill the islands pockets. Many locals can’t even be bothered to form a counter argument because they will be shot down by those fanning the anti-tourist flames.

Here’s the key question: Which industry in Ibiza doesn’t rely on tourism? All roads lead back to the T-Word so let’s put the 3 main cyber-bully myths to bed.

Better is what exactly? Wealthier? Families? Calmer? As anyone who has worked in the VIP section of a club will tell you, wealth doesn’t necessarily bring class, so a wealthier clientele doesn’t guarantee anything (apart from more complaints) and have you seen the hotels in San An? As for families, they only come over for 10 weeks a year so what about the other 4 months? Calmer: Have you been to Lanzarote?

2. TOURISTS SHOULD BEHAVE THEMSELVES

Yes they should but when youngsters barely out of school are encouraged to drink by airports and airlines then left to their own devices on arrival with little to zero police presence you can’t blame them for pushing the boundaries more than they should. No control equals exactly that and leads to no respect. Other tourist destinations enforce laws which would be a novelty to some parts of the island where town halls are more focussed on fining local businesses than law and order on the streets. A young shirtless British tourist isn’t the symbol of everything that is wrong with the island (it’s nearly 40 degrees after all) and we should be thankful that Ibiza still manages to attract mass tourism. By the way have you seen the rowdy young Spanish locals on Saturday nights drinking and littering the town’s car parks. Not every problem lies at the door of the tourist.

3. THE ISLAND IS ALMOST FULL, WHY ARE THEY LETTING IN MORE PEOPLE?

It’s a free county and freedom of movement is one of the key principals of the European Union. The amount of private properties available for rental (illegal or not) has driven demand for the low cost airlines to put on more capacity plus the island council aren’t going to limit numbers as this goes against the very ethos of tourism and let’s face facts: The peak season only lasts for 4 weeks (21 Jul-18 Aug) then it’s back to relative normality, whatever that may be.

So, although it can be difficult at times, let’s try and be more tolerant to our visitors even if they don’t always appear to deserve it. Give them the benefit of the doubt, they might surprise you plus they are spending their hard earned cash on an island we are lucky enough to call home.

Tourists and tourism aren’t dirty words and next time you feel yourself scowling at a tourist who had the audacity to choose Ibiza as his or her summer destination try and turn it into a smile. It’s the islands privilege to welcome them and as other destinations have found to their cost, there is no guarantee that they will always be there.

Ibiza Beach clubs continue to divide opinion amongst residents and tourists. Many play by the rules but some like to push the boundaries.

Last week Cathy Guetta's new 'Bagatelle Beach Club' at Cala Moli hit the headlines when her lawyer threatened to file a complaint to the French consulate after San Jose local police had the audacity to shut off the music for an hour on Bastille day whilst they performed acoustic tests.

This was after they had received a complaint from a neighbour about the excessive noise coming from the beach venue as French VIPs celebrated their national day on 14 July.  San Jose council have opened a file on the complaint and the beach club is now looking at a 12000 euros fine. A French farce indeed.

Deeva Beach at Port d'es Torrent, another San Jose establishment has also been in the news this week when a resident complained of the growing number of beach beds limiting space on the sand for those not wanting to pay large sums of money to be on a publich beach. The complainant counted 220 sun beds and 60 umbrellas even though the beach concession has a licence for 68 and 34 respectively.

Deeva Beach replaced Imagine Restaurant which was very popular with locals and is owned and operated by the Cala Bassa Beach Club Group. Local residents are feeling more and more marginalised by beach clubs taking over the sand.

The pressure is on San Jose council to clean up its act with regards to beach clubs as the local population (and therefore voters) are growing more and more restless with blatant law breaking on a daily basis.

The council recently announced a new law that will be in place for summer 2018 limiting music to 65 decibels which is comparable to a vacuum cleaner or hairdryer. Let's see how that goes……

NOTE: On 01 August 2017 (after this article was written) it was reported in the local press that DEEVA Beach had been inspected and that it complied with all the appropriate licences.