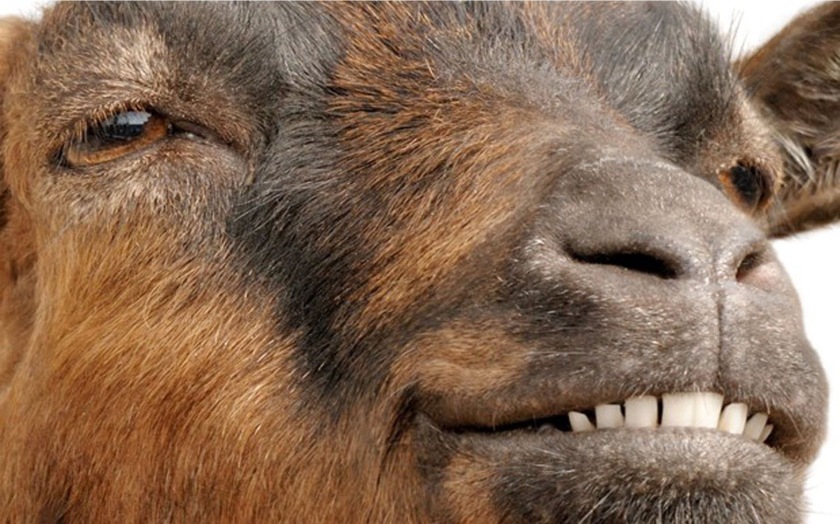 ES VEDRA GOATS: The story that keeps on giving took a further twist today after it emerged that at least 5 goats are possibly still alive on Es Vedra, the rocky islet off the west coast of Ibiza

As reported in today’s local Ibiza press, photographic evidence from Sunday 21 Feb strongly suggests that a small group of livestock are still roaming the rock without a care in the world.

Pep Ferrer, an 80 year old member of one of the families that ‘own’ Es Vedra, known as the “Vedraners”, saw the small herd on the rock face whilst out fishing and couldn’t wait to share the news. As yet it is unverified however Sr Ferrer is convinced in what he saw.

It looks like the government agents tasked with eradicating the goats didn’t do their job properly which will delight many on the island and all of the 20 thousand people who signed an online petition against the cull.

It will be very interesting to see the next move by Caterina Amengual, the environmental minister and the Balearic government who are already under extreme political pressure from their original decision to slaughter the goats and leave their carcasses on the islet. In the face of a huge public outcry they insist that they took ‘the best available option’ to protect the islands flora.

British Prime Minister David Cameron has been in Brussels this week renegotiating the UK’s current deal with the European Union. After contracted talks he not only announced a new deal but also that there will be an “IN or OUT” referendum on 23 June 2016.

It’s a simple question but the result could have far reaching consequences for those of us who live and work in Spain. As citizens of the European Union we have an automatic right to live and work in any member state but this could be taken away from us if the UK votes to exit the union or “Brexit” as it’s now commonly called.

So expect lots of smoke and mirrors from various politicians over the next 4 months as they try and convince the voters to cast their ballots papers for whatever side they are on.  If the opinion polls are to be believed (and that’s dubious after the general election) the U.K. is more or less split down the middle so the campaign is sure to get nasty with many twists and turns along the way similar to the Scottish Independence referendum.

With so much at stake the UK embassies on the European mainland have started a campaign to get expats registered to vote. The Madrid embassy has already started their campaign with a spokesman saying “Interest in the referendum among expats is high, but awareness that they may be able to vote is low.  We want as many expats as possible to know that they may be eligible to have their say.”

If you have lived abroad for less than 15 YEARS you are eligible to vote in the EU referendum however it’s estimated that only 5% of overseas voters have registered so far. With 2 million potential expat votes out there the “Brits Abroad” could swing the decision.

To register go to:

Good luck and do your bit for Britain…..whatever way you decide. 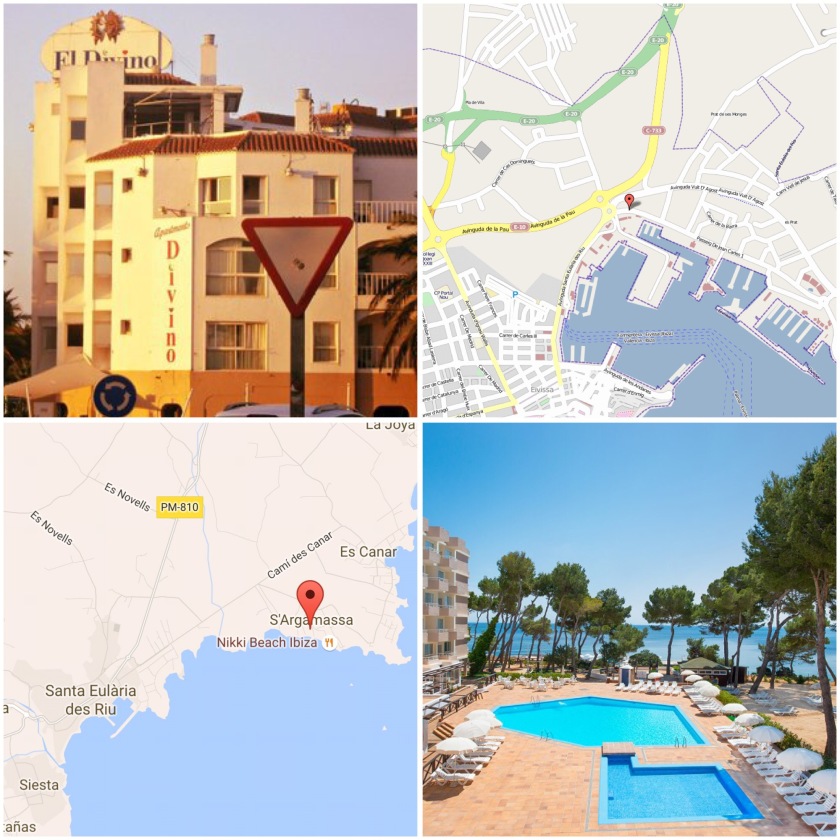 Ibiza’s unstoppable surge towards high end tourism is continuing with the news that 2 establishments are investing almost 10 million euros to upgrade their facilities into 4 and 5 Star hotels.

Apartments El Divino, which occupies 1425 square meters opposite the ‘Dog roundabout’ near Pacha and Ikea at the entrance to Ibiza port, has unveiled plans to spend 3.15 million euros taking it from 2 keys to 5 stars. They will convert 35 small apartments into 38 luxury rooms for a total of 76 guests.

It was also announced that the Ibiza Tourism Planning Commission has approved the refurbishment of the Hotel Augusta s’Argamassa in Santa Eulalia at an estimated cost of 6.55 Million euros. This investment exceeds 50% of the assessed value of the property so will be a comprehensive reform taking it from 3 to 4 stars.

Currently the Hotel Augusta has 196 rooms for 372 guests however after the renovation the hotel will feature 230 rooms for 460 guests.

Juanjo Riera, President of the Ibiza and Formentera Hoteliers Association said “it’s clear that the trend is towards more quality and that there is a fever for five-star hotels”. He also recalled that in 2004 the island only had one 5 star hotel, the Hacienda at Na Xamena, whereas now and there are twelve to fourteen.
Source: Diario de Ibiza/Cesar Navarro 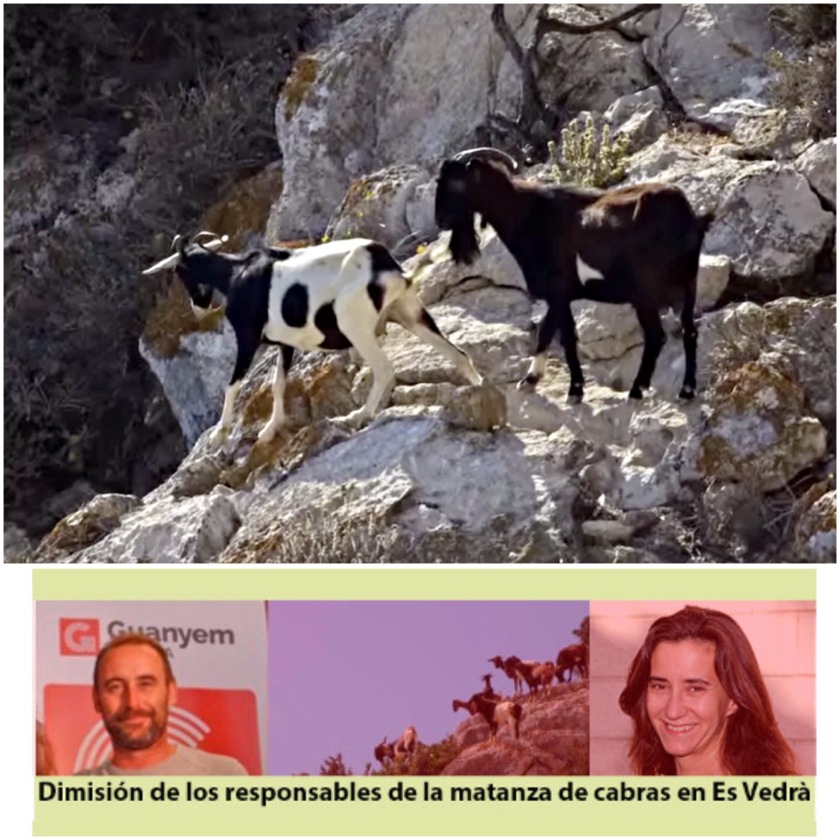 The furore over the killing of 50 goats living peacefully on the Es Vedra islet off the west coast of Ibiza refuses to go away with over 15000 people signing a petition demanding the resignations of politicians Caterina Amengual of Mes per Mallorca and Miquel Vericad from Ibiza’s Guanyem Party.

As is now customary on these occasions social media has been on fire since Friday with the majority of Ibiza residents and island lovers coming out against the decision and wanting to know why other avenues weren’t throughly explored before the green light was given for the slaughter.

Sra Amengual from Mallorca seems to be getting the brunt of the flack as it appears that it was her and her departments decision to allow the extermination of the goats citing that it was the best way to deal with the problem of protecting the flora on one of Ibiza’s most famous landmarks. There’s always been a simmering rivalry between the two islands and the fact that a politician from Palma made the final decision has left many incredulous. Ibiza’s Environment minister Sr Vericad has also been receiving threats via social media for supporting and ‘congratulating’ the decision and has reported these to local prosecutors.

Environmentalists are adamant that it was the best way forward but the Animal Rights group PACMA are not accepting it lightly with calls for somebody to be made accountable especially for the law breaking in relation to leaving the carcasses where they fell to decompose naturally.

The story took a further twist after a group of fishermen unwittingly witnessed the slaughter and gave a graphic first hand account of 4 men with guns and “blood everywhere”. The Partido Popular are also sensing political blood and are demanding resignations in the Balearic Parliament. 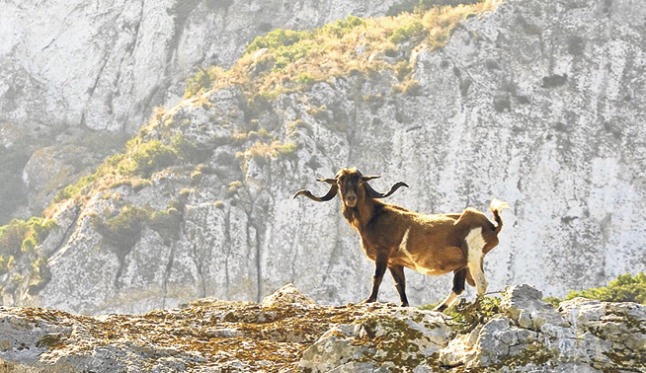 After almost 25 years the fabled goats of Es Vedra have now been eradicated from the small islet that lies off the west coast of Ibiza. 5 females and 1 male were introduced to Es Vedra in 1992 however the Balearic and Island governments have now decided to get rid of them to “recover the native flora of the rock”.

After consultation it was decided that the best way was to kill them rather than remove them so yesterday (4 Feb 2016) environmental agents sailed over to the islet and at 8am began shooting all the helpless creatures. By 2pm their grisly task was complete although they will return today to ensure that none were missed in the cull.

The slain animals will be left on Es Vedra to decompose naturally as it was also deemed too dangerous to remove the carcasses even though this is technically against the law (according to Ley 8/2003 de Sanidad Animal).

Caterina Amengual, Director of Natural Areas and Biodiversity for the Balearic Department of Environment (belonging to the environmentalist coalition ‘MES per Mallorca’) said “it’s a question of priorities and the conservation of ecosystems is a priority. We have an obligation to protect natural areas”.

The Ibiza Insular Minister of Environment, Miquel Vericad of GUANYEM EIVISSA, congratulated the Balearic Government for the decision to remove the goats commenting “We have a duty to protect our heritage, which makes it unique to Es Vedra and Ibiza.”

Some local residents are very upset about the decision especially as the same government recently proudly announced that the Balearics were ‘anti-bull fighting’. Ibiza residents are well known for their love of all animals so they are decrying this as double standards.

The goats of Es Vedra could be clearly seen from sailing vessels and were part of the myth and aura of the rock. I myself have spent many hours moored around Es Vedra trying to convince friends aboard that the goats actually existed. Sometimes we left without seeing them but many times we were able to spot some of the herd carefully traversing the steep rock face. It’s an extremely sorry end to a story that I often told and always put a smile on my face (especially when I was proved right over the doubters).

The Balearic & Ibiza government have been unequivocal in saying that this was the best course of action in protecting one of Ibiza’s most famous landmarks but a small light has gone out on the mythical rock and you can’t help thinking they have taken the easiest and cheapest option. Delivering death to Es Vedra is not good Karma but the environmental experts know what they are doing after all, don’t they?