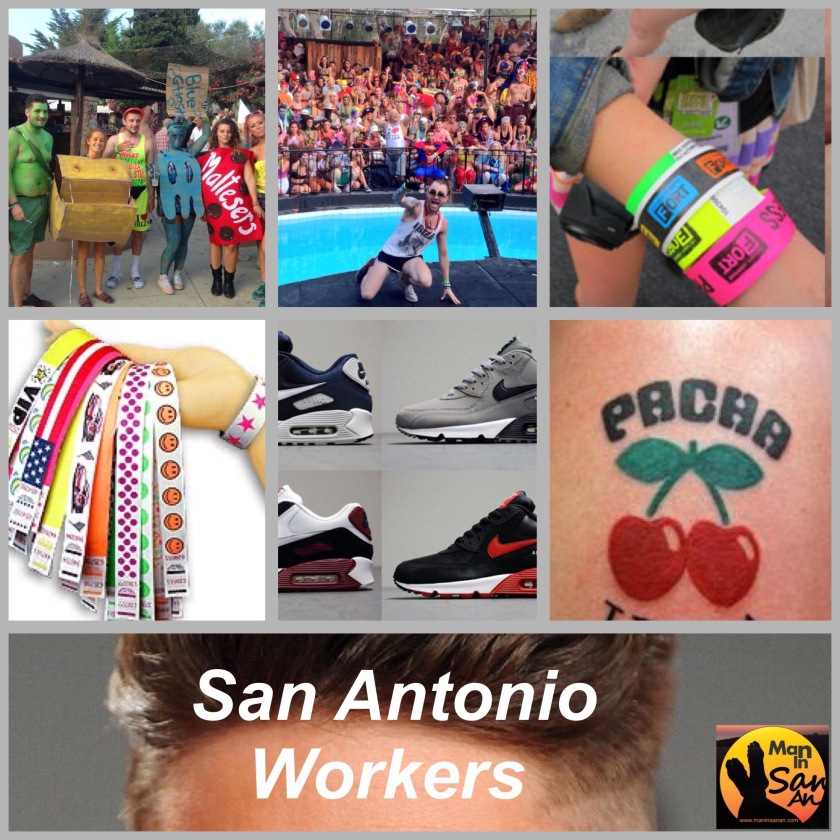 This coming Friday 17 July is the annual ‘SH1T Party’ that takes place at Fantasyland, home of the Zoo Project and will see well over 1000 summer transients party through the day and night. This infamous island party was started by the San Antonio workers so what exactly is a “worker”…….

The term ‘worker’ usually implies that you have a job and do some work however as you may already be aware normal rules don’t apply in Ibiza and definitely not in San Antonio. Back in the 90s there were only a handful of workers mainly in the West End PRing outside bars and selling the odd substance to get by. There were no season passes to clubs but there was the numbered ‘Space tag’ – allowing free entry into the worlds best club – the holy grail for all workers! Holiday reps ruled the roost as they controlled tourists and tourists meant bar crawls and bar crawls meant money. Bar owners fussed over Holiday Reps who in turn sneered at workers.

Ibiza in those days was (and still is) a mythical place: No internet, no mobile phones and no social media meant that the myth was based purely on word of mouth and first hand experience but by the end of 90s came the Internet revolution where tourists didn’t need holiday companies any more and the independent travelers came to the fore with Ibiza being one of the first destinations to see an influx of low cost carriers and cheap hotel beds costing a few hundred pesetas per night.

The Internet explosion soon sent the message far & wide and the message was that Ibiza was a party paradise that you could enjoy for 3 months, would cost you very little in real terms and you could get by on doing a few odd jobs such as selling tickets or dragging people into bars. You also had the added bonus of having the chance to blag yourself into the top clubs and private parties and rub shoulders with a few A-list stars (and a few Z-listers as well). You certainly couldn’t do that at Maestros in Bradford or the MGM in Nottingham. What was not to like for a good looking 20 something with 3 months off in the summer?

Fast forward and by the mid noughties there were 3000 (that’s THREE THOUSAND by the way) young people in San Antonio not doing much work but having a life-defining summer experience before settling down back home with a serious job.

The term ‘worker’ was coined because these youngsters always intended to work even if the intent dwindled after a few days or weeks and it still makes me smile when someone introduces themselves as a ‘worker’ followed by ‘do you have any work’ – Don’t be too judgmental you just need to remember that it’s a collective term rather than an adjective.

Numbers have dwindled a little over the last few years but there are still at least 1500 of them in San Antonio alone, you can usually identify them by their wristbands, tans (or lack of one) wearing of the latest fashions and taking themselves a bit too seriously. Asking for workers discount is obligatory as is the desire not to work too much but party to the max. They pack themselves into overpriced accommodation and live in tough conditions because every morning they wake up to the sunshine and the knowledge that there’s another amazing Ibiza party that day and/or night just waiting to be posted on Facebook.

In worker terms the San Antonio worker is top of the worker food chain especially those who actually get a decent job whether it be dancing, PRing or selling tickets for one of the bars. If you don’t believe me then go to Benidorm or Magaluf and look at the workers over there. Wow!

As much as the Ibiza snobs love to hate them for me the San An worker is a vital cog in the machine. They are their own micro economy with plenty of local business’s relying on them. They keep getting put down by exploitive employers yet the good ones bounce back and the weak ones return home to the comfort of their mums cooking. Lots of workers return to the island and knuckle down to a ‘proper’ summer job and those who don’t spread the Ibiza gospel far and wide via social media. As experiences go its right up their with the best time of your life, just ask Jamie Jones and Lily Allen.