BLOOP, the month long festival that changes large empty spaces on the sides of buildings into dramatic urban art, has dramatically fallen out with San Antonio Council in a tit for tat war of words played out in the press and social media for all the public to see.

Problems have been brewing ever since Bloop turned the side of the Vara de Rey school into a large mural which some deemed offensive (see above pic) and caused a headache for the local council.

The world renowned artists responsible for the amazing street art issued a press release that ironically pointed the finger of blame at Culture councillor Francisco Tienda citing a “lack of support” for the festival and saying that they have been “treated with contempt” and made to feel “worthless”.

In response Sr Tienda took to his personal Facebook page to directly accuse the Bloop organisers of trying to turn the ‘Far de Coves Blanques’ lighthouse into a bar for their own personal gain and also highlighted their continuing lack of organization “changes of dates”, “mistakes” “problems and failures” and also not once mentioning San Antonio in any poster, advertisement or website.

The Bloop festival organiser Matte Biokip admitted that they have “made mistakes over the years” but that the problem is “with those who load their frustrations and inexperience on to others to justify their shortcomings” referring directly to the San Antonio government team.

Sr Tienda continued saying that the 12000 euros cost of the Bloop Festival could be better spent elsewhere on something that was less elitist and more in touch with the town.

The Ibiza Town council has already started making noises about taking Bloop to the island’s capital however boss Matte Biokip told me persnally that he wants to carry on in San Antonio through private sponsorship as he feels that Bloop can make a significant contribution to the towns cultural heritage. 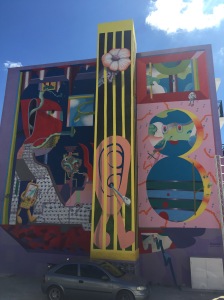