Juan Jose Ferrer Martinez, head of the centre right PI party, now has a big weight on his shoulders. After 4 years of opposition at San Antonio town hall his party gained 3 seats in the recent municipal elections so he found himself in the unenvious position as kingmaker for the next administration. PP won 8 seats & PSOE/REINICIA won 6 & 4 respectively so his 3 seats were enough to give either side the 11 seats required for an overall majority, so it all came down to him & his party to decide who would be the next Mayor of San Antonio.

After 4 years of being battered by the absolute majority of the Pepita Gutierrez regime it wasn’t a big surprise that he eventually decided to form a Tri-party coalition with PSOE/REINICIA and make Pep Tur ‘Cires’ the 1st socialist mayor of Ibiza’s 2nd largest town however on paper & character PI have much more things in common with PP so his decision is sure to cause some conflict within his own party but his desire to change San Antonio means that he is now part of a 3 party coalition with those who may not always be on the same page as him.

He was offered the Deputy Mayors job if he sided with the PP but a personality clash between the hierarchy of the 2 parties ensured that this was never really an option.

At yesterday’s inauguration his mood was very upbeat and as we chatted afterwards he told me that he knows that there will be challenging times ahead but he was happy that the people of San Antonio had given him & his coalition a chance to govern and a chance to change San Antonio.

I have known Juanjo since he was a teenage receptionist at a local hotel and he has worked tirelessly over the last 4 years on the opposing side trying to make San Antonio a better place. He now has his desired chance and also the extra responsibility due to his decision to side with PSOE/REINICIA. I wish him well and look forward to seeing the changes that he, Pep Cires and Pablo Valdes have promised for our town. MM

This is the moment when Pep Tur ‘Cires’ was elected the Mayor of San Antonio by 13 votes to 8. All 21 councillors have 1 vote and as anticipated the Tri-party coalition of PSOE, REINICIA & PI joined forces to elect a socialist mayor for the first time in San Antonio’ s history.

The atmosphere was electric with most councillors receiving whoops & applause when entering the chamber. The biggest cheer was for REINICIA’s 4 councillors who’s supporters were euphoric that this little known party had now become the holder of the Deputy Mayors office. The scenes were quite extraordinary with the socialists pumping fists and high giving after so many years of opposition. Especially animated was Pep Marge who has worked very hard for the socialists in San Antonio and now sees his sister Neus sit in one of the elected seats.

All councillors were sworn in one by one dressed in their Sunday best apart from new Deputy Mayor Pablo Valdes who looked like he was from an indie rock band with ripped jeans, vest and tight jacket.

The audience boasted at least 4 previous San Antonio mayors plus all the political heavyweights from PSOE such as Vicent Torres, Xicu Tarres and Pilar Costa.

The PP showed great humility in what was a difficult day for them especially Pepe Sala who will spend the foreseeable future sitting in the chair of the leader of the opposition.

I managed to talk to nearly everyone of the new local government congratulating them on their coalition pact but also reminding them that of their election promises and their underlying message that they intend to ‘change’ San Antonio for the better.

So on Monday Mayor Pep Cires, Deputy Mayor Pablo Valdes and 2nd deputy Mayor Juanjo Ferrer will take up their new positions and embark on a new chapter for San Antonio. The campaign has now finished and its time put their words into actions and follow through with their election promises. There is no hiding place, San Antonio and especially myself will be watching. MM 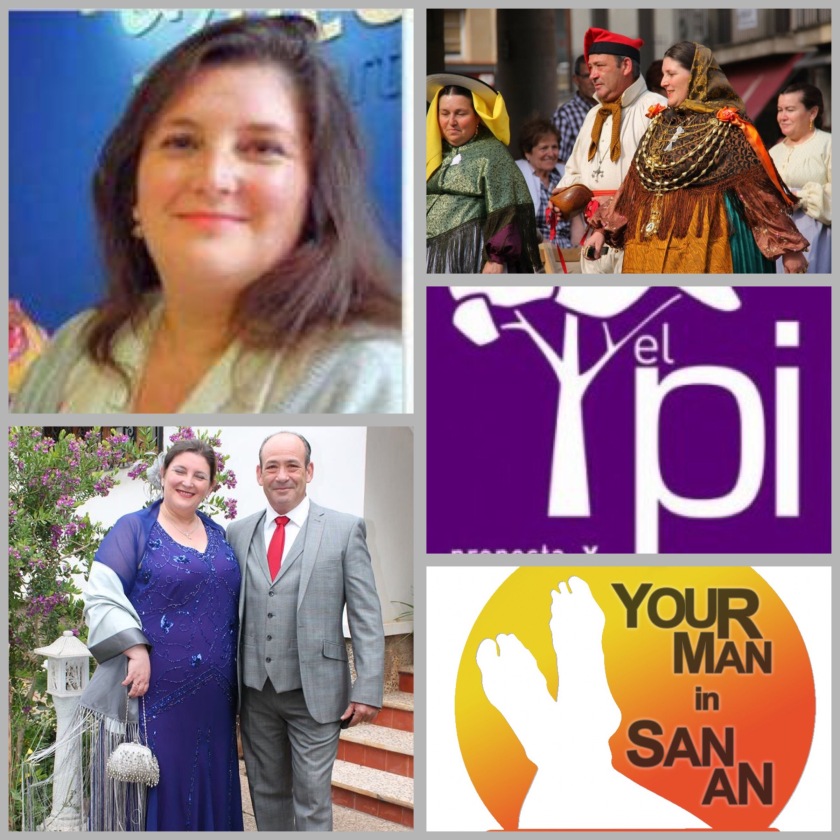 I have to be honest and say I really wanted to become the 1st British councillor for San Antonio however I’ve been beaten to it and it’s almost gone unnoticed. I’m slightly jealous however I’m also happy that it’s somebody I’ve known and respected for over 20 years. CRISTINA RIBAS from the centre right political party ‘PI’ is actually CRISTINA RIBAS MOUNTFORD born in Newcastle-under -Lyme to an English mother and Ibicenco father and very proud of her British heritage even though she moved permanently to the white isle aged 3. Her mother Doris first came to Ibiza with a friend in the early 60’s at a time when travel agents didn’t even know that the island existed and it took them 3 planes to get here (a bit like the winter then!). Cristina tells a great story of how it was fate that her mother came to Ibiza as she and her friend chose their holidays blindfolded with a map and a pin. On that ‘blind’ holiday her mother met her father Toni and romance blossomed and over the next few summers Doris made the trip back accompanied by different family members with Toni visiting England whenever possible. Her parents finally married in England in 1965 and the rest, as they say, is history. Cristina grew up in Ibiza, studied tourism and has always worked within the tourist sector, firstly as a hotel receptionist and then at the airport for the last 25 years. This is where I first met her as an airline representative helping me out especially on long delays and flight cancellations. She still works at the airport but now handles private jets and their passengers – how times have changed. Cristina is married to Evelio who is also from the island and they have two daughters and they all share the same love of Ibicenco culture and tradition and even perform the Ibicenco folklore dance.

Cristina says “Although my heart is mainly Ibicenco I feel as much English as I do Spanish, I’m proud of my English blood and although my parents and grandparents are no longer with us I like to visit family and friends in England as often as possible and keep the ties. I’ve decided to go into politics because I love San Antonio and I think there’s so much to be done and why not do my share. To all British residents: I will be pleased to assist you with anything in any way I can”.

From 13 June 2015 Cristina will have a lot more work on her plate as she embarks on this new chapter in her life, she will be involved in various jobs at San Antonio Town Hall: Trade, Agriculture and Fishing, Fiestas for the villages, Ibicenco culture and traditions and in charge of the Buscastell, Santa Ines and San Mateo areas.

Having personally known Cristina for over 20 years I am delighted that someone who understands the British culture and mentality is now occupying a seat in the town hall as this can only be a positive for our town. MM