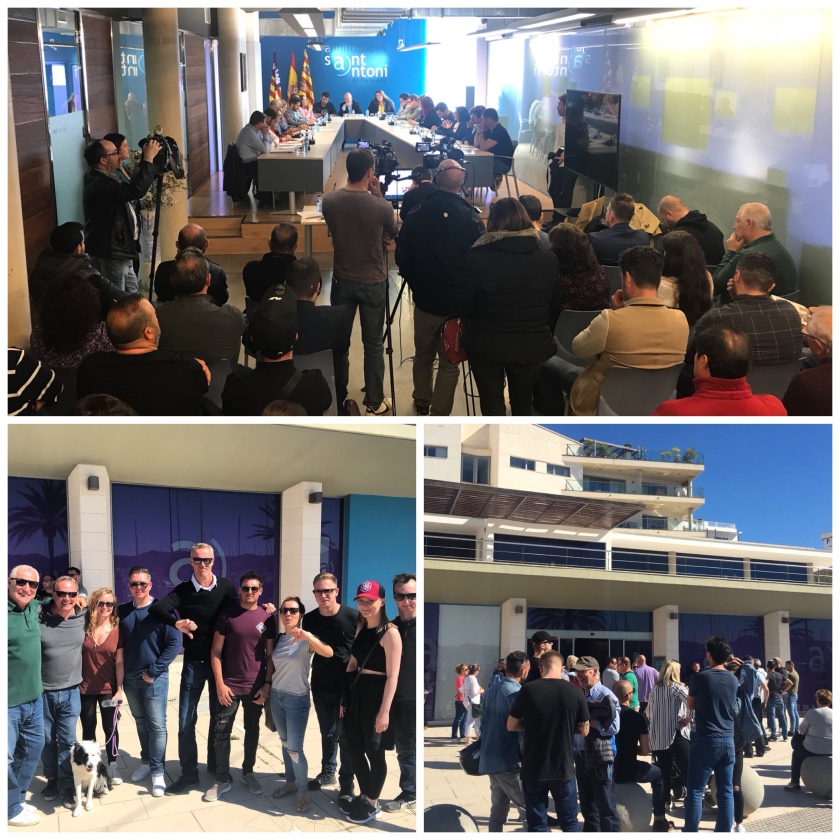 San Antonio has always been a complicated town but even by its own standards yesterday (Wed 28 Mar 2018) was an extraordinary day.

This was the day the left wing coalition council were voting to reduce the opening hours for the town’s famous West End with more than 200 of those affected converging on the small meeting room to try and watch the events unfold.

Extra police and guardia civil were called in to control the crowd (more officers than you will see in the West End during the whole summer) after only 50 people managed to access the council chambers, the rest were bundled back outside into the morning sunshine for ‘security reasons’.

Inside the chamber the atmosphere was electric with a sinister undertone. The pantomime villain here was Deputy Mayor Pablo Valdés of the left wing ‘Reinicia Party’, the town’s self appointed messiah. Starting his speech to justify the decision to close all establishments in the West End at 3am you could see the sweat glistening on his tattooed neck.

After a nervy start and plenty of heckling he soon found his confidence even through loud shouts of “liar” and “dictator” from the animated audience, mostly bar owners and operators exasperated and disgusted that the town, world famous for it’s nightlife and liberal attitude, had come to this.

Mayor Pep Tur (PSOE party) was reduced to a bit part only hissing “Silence!” at regular intervals as the audience listened to Sr Valdes’ long monologue and became more unsettled as the vote came closer. Marcos Serra on behalf of the centre right PP party spoke emotionally and clearly with counter arguments gathering sporadic rounds of applause from the baying crowd alas it wasn’t going to change the outcome as the deal had already been done behind closed doors, even though some were still hoping for a last minute rebellion on the council benches.

When the vote came, the coalition council winning 12-8, it was quick and cutting and there was an eerie shocked silence in the room before everyone started filing out with heads bowed. The show of strength by the San An nightlife community in reality was too little, too late to make a difference. Where were they all in the previous meetings when the plans were being hatched?

The socialist coalition council who seem to detest the tourism that San Antonio attracts won this battle but still so many questions remained unanswered.

Is there an actual plan to change the touristic model? How many people are actually affected by the noise? Why did the Calle del Mar road get removed from the protected zone at the last minute? What about all those who have done nothing wrong and have spent thousands on their business? Why not get rid of the few bad eggs rather than throw out the omelette?

Smokescreens and mirrors, this was not only incredible theatre but high stakes politics mixed in with some old scores to settle. As always there are winners and losers but with no actual tangible replacement plan in place let’s hope that San Antonio isn’t the biggest loser in a competitive market.

7 thoughts on “An Extraordinary Day for San Antonio”