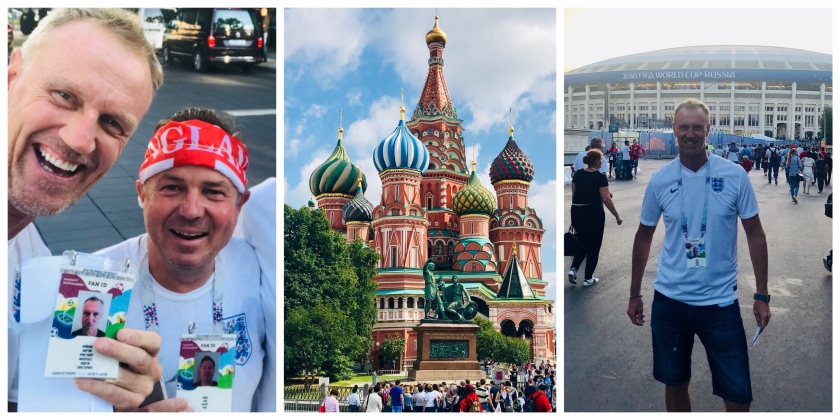 It doesn’t happen very often, in fact you’ve got nearly as much chance of seeing Halley’s Comet as seeing England win the World Cup so when my team qualified for the semi final and a ticket became available it was too good an opportunity to turn down especially as I’ve always wanted to visit Moscow, even if it was only for 36 hours.

It was a long journey from Ibiza to Moscow via Palma eventually gaining entry into the Russian Federation by staring down the attractive yet stern faced immigration officer whilst also realising that Russians aren’t familiar with the word ‘queue’.  With very few signs in English you immediately get the feeling that you’re in a foreign land. In this globalised age where English is the universal language it was quite refreshing that Russia still retains that edge of an other-worldly, unique destination especially as the friendly taxi drivers don’t speak much or any English making basic communication a real challenge.

After overcoming the language barrier with plenty of handshaking and backslapping the city was opening up before me and first impressions were that it’s big, very big with the Moskva river running through the heart of it. It’s clear that the communist dream is over as you pass McDonald’s and cosmopolitan western boutiques on many street corners. People are dressed smartly and you sense fashion and appearance plays an important part of everyday life in Moscow.

A little sightseeing is good for the soul and you can’t go to Moscow without a visit to Red Square and the surrounding area, which is a must-see.  St Basil’s Cathedral a jaw dropping, colourful contrast to the Kremlin which is directly opposite, the epitome of the old grey soviet republic. It also has to be said that Russians like a statue, they are in all prominent places and usually big phallic tributes to times gone by.

As it was semi final day there were plenty of football fans from both sides milling around Red Square. Both sets of fans were in fine voice and the atmosphere was buzzing with zero aggression. Now it was match time but we mistakenly took a taxi instead of the metro so after a stressful 90 minute drive through rush hour we managed to get to the ground only 20 mins before kick off.  Security was tight but efficient and the Luzhniki Stadium is a magnificent coliseum with great views from all seats, a fitting venue for a semi final and final of the World Cup.

After the national anthems the game settled down with England taking an early lead with a direct free kick from Kieran Trippier. I was directly behind him at the opposite end and it was a goal from the second it left his foot. England pressed for a 2nd and looked good for a while but the Croatian pair of Rakitic & Modric gradually started to boss the game. The equaliser came midway through the 2nd half and startled England who went into defence mode relying on the old trick of lumping the ball up to the big man (I’d mistakenly thought we had moved on).  Croatia looked the most likely to score which is exactly what they did deep into extra time after the English momentarily went to sleep. There was to be no glorious come back this time.

Sport can be a cruel game but as we filed out of the stadium most England fans were pragmatic in defeat. We were beaten by a slightly better team on the night and couldn’t quite step up to the level required. The minuscule margins at the top of sport had conspired against us but our young Lions had given it a good go and can go home with their heads held high (after the pointless 3rd and 4th place play off in St Petersburg on Saturday).

It was time to lick our wounds and drown our sorrows in the local bars, once again meeting only jovial people every step of the way. Not one hint of danger after the UK press had over hyped potential problems for traveling England fans. The fact that lots of the messages I’d received from friends had asked me to ‘stay safe’ said all you needed to know about the well sold lie about this celebration of football yet at no time did you feel threatened. People were overwhelmingly friendly and Russians seem to have a special welcoming glint in their eye.  We mulled over the result and sank a few beers until the sky became bright but seeing as it gets light at 3am in Moscow it wasn’t the latest of nights.

On the journey back to Ibiza I was able to put things into perspective. The result didn’t go England’s way but it’s no disgrace to lose especially when youth has been blooded and experience has been gained. We lasted longer than Germany, Brazil, Argentina & Spain and the young Lions had over achieved in many ways but still a feeling lingered that England will never get an ‘easier’ route into a World Cup Final.  As one of the finalists will find out on Sunday, there can only be one winner but the real star of the tournament has been Russia and specifically Moscow. What a city! Big, busy, vibrant, cosmopolitan and most of all friendly (and did I mention the beautiful women).

As those who live in Ibiza know all too well you should never believe what you read in the papers and this was clearly the case for Russia 2018, a celebration of sport in a country proud of its heritage and looking forward to its future with confidence. And by the way, next time it’s definitely coming home…

4 thoughts on “From Ibiza to Russia..with Love”