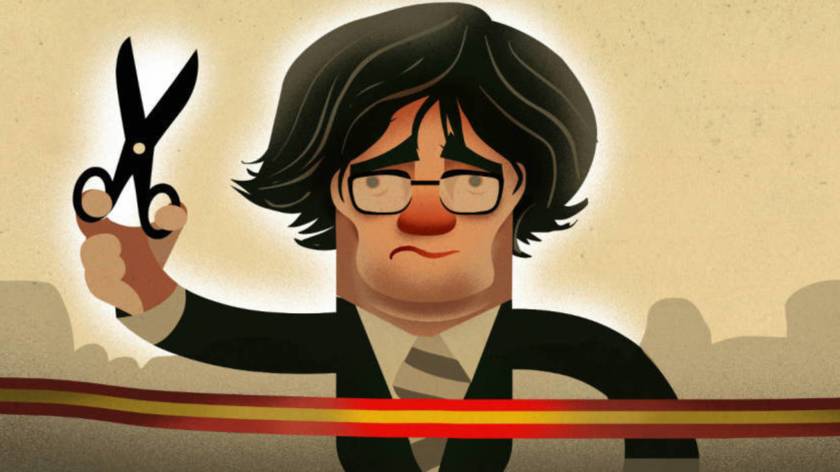 I’m sure that in the mind of ex-Catalan leader Carles Puigdemont he saw himself as a Che Guevara type figure, leading his people out of the oppression of a totalitarian state, to be their saviour lauded forever and a day with statues erected and even a bank holiday named after him.  That could still happen but history has a funny way of remembering events and people and usually only remembers the victors.

I must declare early in this piece that I don’t have much empathy with the Catalans although I adore the city of Barcelona and the coastline all the way up to France but I have had several run-ins over the years which have framed my mind into the way Catalan people think and act and lets just say we aren’t entirely on the same page. They have their way and I have mine is probably a politer way of putting it.

That being said I also accept that people have the right to map their own future as long as it’s within the framework of the law of the land and this is where Sr. Puigdemont’s cunning plan comes crashing down. Unlike Guevara we aren’t talking about an oppressed state wracked with poverty and starvation, we are talking about Catalunya, one of the wealthiest parts of Spain that already has a standard of living far superior to many other places within the Kingdom.

Imagine if the SNP of Scotland or Plaid Cymru of Wales called a snap referendum where only 43% of the electorate voted and then decided to declare full independence based on the 90% voting yes, regardless that this only represented 38% of the electorate. Any way you care to look at it that’s a big call.  What about currency, central banks, borders, administration and everything that comes with being a stand alone republic that doesn’t have to piggy-back on the country you’ve just spurned. Hell hath no fury like a spurned partner.

Even Nicola Sturgeon, the wily SNP separatist, knew that the only way to ‘force’ a referendum vote was by political means and pressuring a minority government into concessions. The SNP got their way through tenacious politicking but Sr Puigdemont was in far too much of a hurry to go via that route.

As my good friend and Catalan resident Laurent Bates eloquently wrote a few weeks ago, the Catalans view themselves as a completely different country to Spain and that should be respected but to start a civil war on a whimsical notion no matter how romantic is just plain stupid. The response from Madrid was too heavy handed and the subsequent King’s speech to the nation too provocative but there are 3 sides to every story and this story can’t have a happy ending in the short term.

Here in Ibiza I’ve spoken to as many Spanish friends and acquaintances as possible trying to find someone who supports the Catalans and so far I haven’t found anyone (other than Catalans) and this tells all you need to know about the polarising situation we are in.

And then we have Señor Puigdemont, the floppy haired pantomime villain of the piece who instead of digging in his heels and becoming a martyr for ‘the cause’ decided to hotfoot it to Belgium at the earliest possible opportunity claiming that the justice system will be biased against him.  Of course it will be, it’s nearly always biased against people who flagrantly break the existing laws using public money to do so.

The writing is on the wall for Carles and his merry men and women in the current climate but things could change if the December elections decide so.  And that’s just it, democracy usually finds a way and if in the future the politicians agree on a referendum that is fully supported by a clear yes and no campaign then the Catalans deserve their day at the ballot box in a legal, transparent and cohesive way but as BREXIT has so far proved, be careful what you wish for.

One thought on “The Curious Case of Carles Puigdemont”