This week I am celebrating 26 years on the island. On the 15 May 1991, a group of fresh faced wannabe holiday reps including myself arrived in Ibiza with very little money and big attitudes. The irony is that I wanted to be placed in Corfu but they sent me here, fate plays a big part in my story.

The Ibiza of 1991 was different from today in many ways. People seemed to be a lot more humble and you never saw any big cars on the road (a Renault 5 was the norm). Displays of wealth were frowned upon and money was important but not the driving force that it is today.

Apart from holiday brochures (remember those), Judith Chalmers and word of mouth the White Island was a mythical destination that many only stumbled across by chance. Families went to Santa Eulalia and Playa den Bossa and the youngsters that came on holiday to San Antonio weren’t bothered about the beauty or spirituality, it was all about the West End and the nightlife.

The big clubs weren’t as accessible, they were for cool foreigners or the London set, the youngsters stayed in the bars for a week rarely venturing out of San Antonio. It was only after the explosion of nights such as Manumission, Clockwork Orange and Cream in the mid to late 90’s that bought mass tourism and SuperClubs together.

Another irony is that in 1991 I was told that Ibiza ‘wasn’t the same anymore’ and that it had ‘lost its soul’. These words are repeated every year by those who have been tossed aside by the increasingly hard nature of the island especially with the arrival of new money. It ain’t easy to live and succeed on the white Isle and when I say succeed I mean make a reasonable living so you can live the life you choose.

It took me a few years before I viewed Ibiza not just as a place of work but also to a place to live. Winters weren’t easy but I was one of the lucky few who was able to settle down, buy a house, have a family and lead a fairly normal existence (normal in Ibiza terms anyway).

So from a small, relatively untouched backwater Ibiza has grown into the corporate animal it is today where every 3rd car is a Range Rover Evoque, the default vehicle for new or 3rd generation money.

The forefathers may have been horrified but you can’t stop ‘progress’ and before you start scowling please remember that the Ibiza of 1991 had constant power cuts, didn’t have air con in ANY hotels, the untreated roads were death traps and most of the excursions involved sangria and sausages.

It’s been an interesting experience to witness all the changes over 26 years filled with amazing memories, great friends and more sunsets than you can shake a stick at but as I hear that Ibiza ‘isn’t the same anymore’ and ‘has lost its soul’ I keep smiling because in my opinion nothing has changed but everything has changed.

The nature and beauty, the open armed hospitality (especially of the pioneering older generation), the 9 euros ‘menu del días’, the street markets, the tapas and vino payes, the atmosphere, the friendships and the raw spirituality is still here in abundance.

But in a world obsessed with social media, selfies and wannabe celebs this wonderful island isn’t an exclusive, well kept secret anymore and because many want a piece of the action the simple life in Ibiza now comes at a cost that some can’t afford. 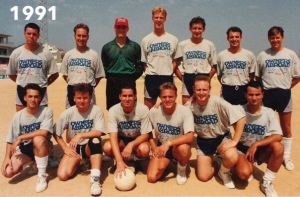 6 thoughts on “IBIZA: 26 YEARS AND COUNTING”