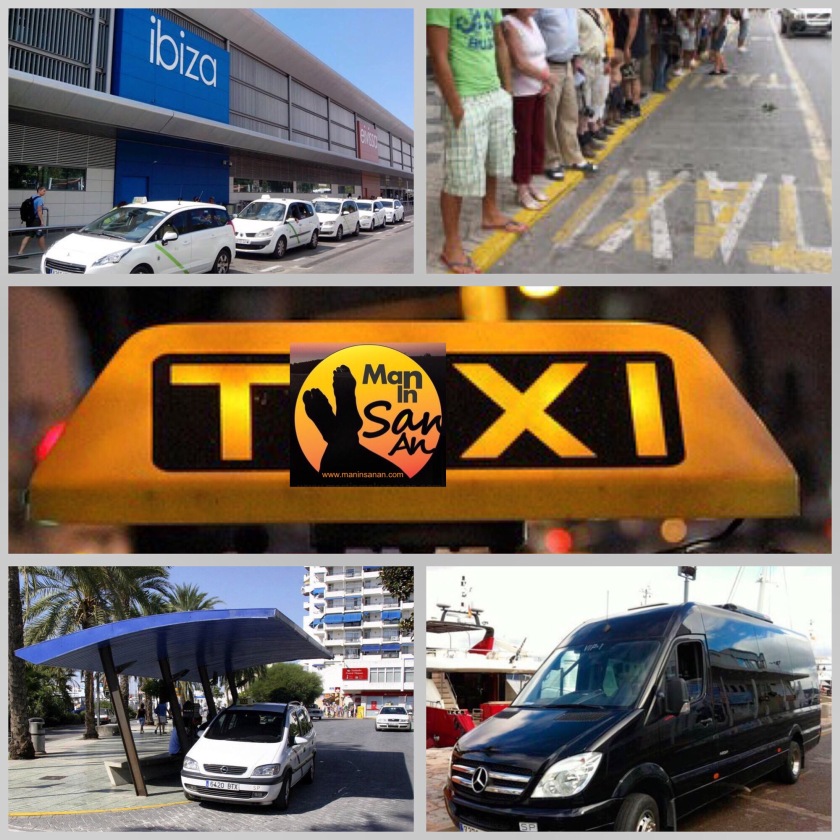 When tour operators ruled the roost in Ibiza, you (or probably your parents) booked a week away in the sun with a local travel agent (foreign weekends away were unheard of), got on a chartered flight, had your meal in a tray, came through Ibiza airport (usually making a comment about the hot weather), walked up to a holiday rep in a white shirt and red tie who ticked your name on a list and directed you to a large coach. You then sat on the aforementioned vehicle for an hour while it went around 10 hotels dropping off 4 people at a time. Ahhh the nostalgia!!

Fast forward to 2015 and you book your flight and hotel online, cram all your belongings into your hand luggage, sit on a flight full of lunatics then arrive at Ibiza airport to be greeted not by a smiley man in a red tie but a long queue with 100 people waiting for 1 taxi.  Brits love to queue but other nationalities sometimes have difficulty with the meaning of the word’. NIGHTMARE!

Too many people, not enough taxis is the simple equation especially during the peak summer months and because the ‘taxistas’ only have the same short amount of time to make money their customer service can sometimes be ‘slightly lacking’.

If you come to the white isle in April, May, early June, late September or October then taxis are everywhere. It’s a role reversal as 100 taxis wait for 1 person, Ibiza truly is nothing if not an island of contrasts. Come in the peak 10 weeks, late June to early September, and taxis (or the lack of them) can ruin your holiday unless you are organized. It’s tough to remain calm when you can’t get a cab, it’s 35 degrees and you only have 30 mins until they give away your VIP table.

I have sympathy for the taxi owners. They pay several hundred thousands of euros for the license and then the drivers get abused by shirtless, drug addled tourists who don’t know where they are going after a 2 day bender. I’m being extreme but you know where I’m coming from (don’t you?). My taxi driver friend Pablo Alvarez tells me his stories of the back street drivers screaming and shouting, comatose clients and downright dangerous behaviour. Not all the time but ‘omnia nimi’ (everything in excess) could be Ibiza’s Latin catchphrase for the peak 10 weeks.

Even though local councils issue emergency licenses during the busy weeks there still isn’t enough supply for the demand so the end result is an overworked, inefficient and expensive taxi service offering a substandard product to clients paying more than ever to come to the white isle. The tourist once again is the one who loses out: a dangerous scenario when you forget who or what is the most important piece of the jigsaw puzzle.

The lack of availability and poor customer service has inevitably led to the rise of the ‘Pirate Taxi’, something that has escalated beyond control in recent years, now so blatant that there’s 20 of them waiting to pounce in the arrivals hall at the airport. Supply and demand means that they are all busy using uncontrolled vehicles earning untaxed money. No wonder the legal taxis are going loco.

Blame the Pirates if you will however everybody knows where and what they are doing so can they presume that through administrative silence and inaction of the local authorities that they are doing nothing wrong?

However some of the pirates are of dubious nature so we MUST put the customers first, the best transport services in the world are those that are ambassadors for their destination, an extension of the hospitality service, sharing advice and helping wherever possible.

So is there a solution? Well to start with through controlled deregulation we can look to solve some of the issues with licensed public Mini Cabs/Vans to fill the void between taxis and coaches. Make it easier for individuals and companies to offer legal transport services but also ensure that their vehicles are legal and roadworthy. Charge the Mini Cabs/Vans a reasonable license fee to cover any additional costs and specify that a quality product must be offered. Have a web portal to monitor quality service so the good can prosper and the bad can be removed. Like most things in life the best ideas are the simple ones. More transport, more wealth creation, more taxes, more jobs, better service, happy customers.

Or am I missing something?