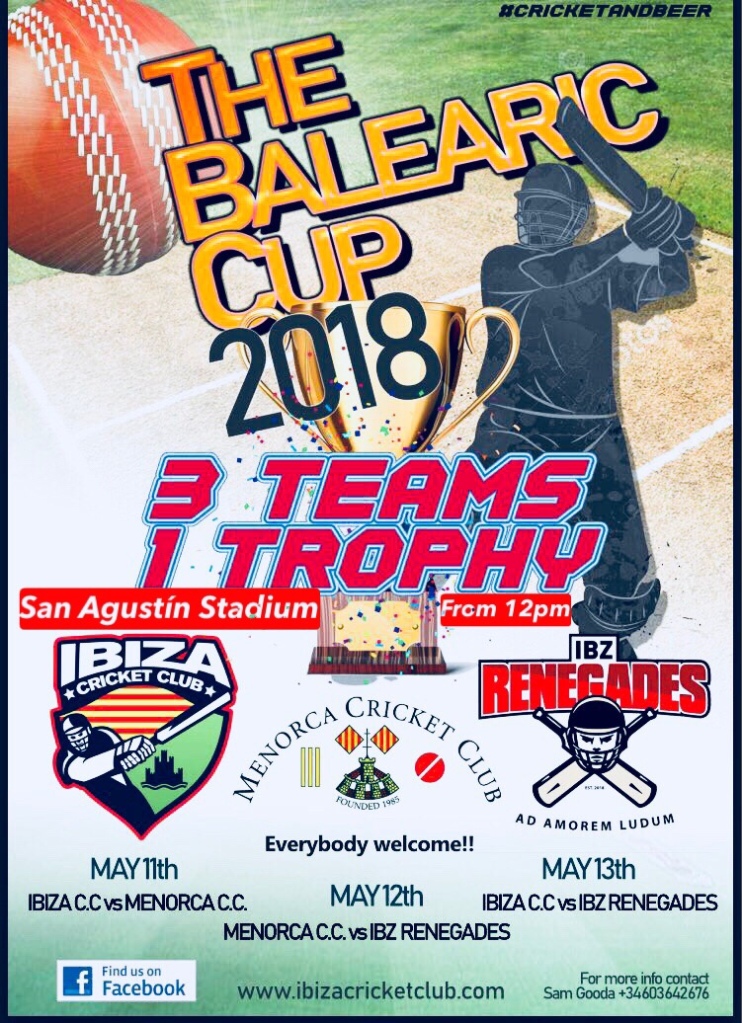 This weekend will see the Balearic Cricket Championship played in Ibiza at San Agustin stadium with games on Friday, Saturday and Sunday. This year will also be special as it’s the 30th anniversary of the very first tournament, played in Ibiza in 1988.

To add even more spice, the 2018 tournament will be unique after Mallorca Cricket Club pulled out at the last minute so Ibiza have entered 2 teams for the very first time. Mallorca CC lost their ground a few years ago and have struggled to keep the momentum without it. Their withdrawal at the 11th hour sent shockwaves through Balearic Cricket but a contingency was quickly put into place to safeguard the popular round-robin format.

Sam Gooda will lead Ibiza Cricket Club into his 2nd Balearic Cup and his team will start as favourites on home soil. Sam has worked tirelessly for the club and has put together a fine team with Paul Cruttwell from Fusion Satellite as his right hand man. Cruttwell will open the bowling along with Jim Harvey, the owner of Dalt Vila’s quirky Paradise Lost cocktail bar. Gooda was Ibiza’s leading run scorer last year but will hope that temperamental overseas player Johnno Gordon can chip in with a decent knock.

Menorca CC will also be quietly confident of taking home the trophy and will travel with an experienced side with a couple of standout youngsters who can make the difference on the day. Menorca’s captain Simon Cotton, a real estate agent from Stoke, will be hoping to do better than his football club when leading out his side against Ibiza on Friday, aided and abetted by wily Mackem Jeffrey Barker with stalwarts Roy Sturgeon and Andy Tysoe at his side.

Menorca has a beautiful vast grass ground back on their own island, probably the best in Spanish cricket, so will have to quickly adjust to the tight conditions on the artificial pitch at San Agustin.

Finally, the IBZ Renegades has been put together (with myself as Captain) especially for this tournament and will reunite many Ibiza players who no longer live on the island but still retain a great affinity with the club.

Ibiza CC legend Bob ‘the Vicar’ Short will be one to watch out for as he becomes a Renegade and competes in the competition for the first time since 2013. The sexagenarian will be looking to add to his fine record in the tournament which includes 2 victories in 2007 and 2013. In fact the Renegades side will field 6 players from the famous 2007 cup winning side meaning that it’s very much old v new with regards to Ibiza cricket. All rounder Jolyon Swinburn is flying in from New Zealand while the prolific Adam Johnston will open the batting with enigmatic Sam Feasey.

It promises to be a veritable feast of cricket over 3 days, the weather forecast is excellent and although competition on the pitch will be fierce, old friendships will be rekindled and new friendships will be made in the bar after the games over a cold beer. The Balearic Cricket Cup has had some amazing weekends over the last 30 years and this year’s promises to be right up there with the best of them!

All matches will start at 12pm midday at San Agustin Stadium – https://goo.gl/maps/ppUBEKvmRTJ2 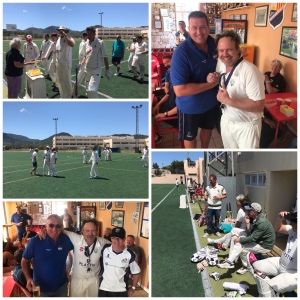 Englishman living and working in Ibiza since 1991. Entrepreneur with a passion for villas, boats, sunsets and San Antonio. Owner of Ibiza Property Shop and Ibiza Speedboats. View all posts by Martin Makepeace

One thought on “Balearic Cricket Comes to Ibiza”

If you can’t beat them join them #dollypartonchallange
.....and we are back. Catching up on the Xmas & New Year stories. Are your ears burning? #Friday #Lads

If you can’t beat them join them #dollypartonchallange
.....and we are back. Catching up on the Xmas & New Year stories. Are your ears burning? #Friday #Lads