Spanish local council elections work on proportional representation where political parties produce a list of candidates so after all votes are counted and divided by the number of seats available giving the number of votes required to obtain 1 seat. So for example: If the equation is that you need 400 votes to secure one seat then if your party gets 2000 votes then you get 5 seats.

All very straightforward you would think although many who appear on the candidates list have no intention of ever serving in a government for a myriad of reasons. Maybe they are a doctor or a teacher or a physio and don’t want to give up their profession and sit in a council office for 5 days a week getting ridiculed on social media. They are there only to give their support for the team they represent, cheerleaders if you will.

To refresh your memories, in the 2015 election no party won an outright majority of 11 seats in a 21 seat council. The results were as follows. 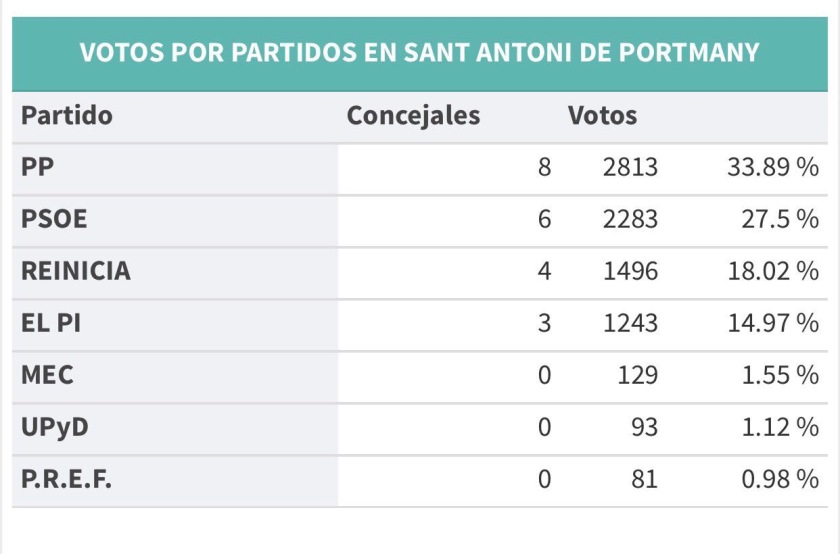 So the 3 smaller parties who won 13 seats between them joined forces in a coalition to form a government, very similar to what happened in the 2010 UK election where Conservative and Liberal got into bed together even though they had vastly different agendas.

Within a few days of the new governing forming the number 2 on the PSOE list, the charismatic Marco Guerrero, had been headhunted by the newly elected Balearic Government. Marco was one of the main reasons why many voted for PSOE in San Antonio but within days he was gone and replaced by Lorenzo Bustamente who’s like a wet weekend in Skegness by comparison.

Now back to Sr Ferrer. His little row with Deputy Mayor Pablo Valdes meant that he spat out his dummy and legged it so there’s now an empty place at the council top table. In accordance with protocol the position was offered to number 4 on the list, Paquito Fernandez, a popular local physiotherapist who didn’t fancy the job. Number 5 wasn’t interested either nor was number 6 so number 7 the polarising ex councillor and souvenir shop owner, Joan Torres has graciously accepted the place on the government team.

So what does all this mean? Probably nothing to most of you who couldn’t give a monkeys toss about small minded politics in Ibiza however these are the people deciding on the future of one of the most famous towns in tourism and they weren’t even the ones who were elected in the first place.

So next time your’e in San Antonio and you haven’t got a terrace to sit down on at 12.01am or you get harassed by a street seller or your pocket gets pinched at the bottom of the west end or you can’t get your rubbish in the skip because it’s overflowing then remember these people.

Some of them are there by default and are making decisions that affect residents and tourists on a daily basis. It’s called democracy but many in San Antonio are scratching their heads and wondering what crisis is coming next from the coalition council.